We will pick up you from your hotel around 8 PM. We will drive to Taba which take around 3 hours. We will have a stop along the way for a break. You will need to cross the border by foot to meet your guide and your bus for the start of your tour. It can take time to cross the border as it is quite small and can become crowded. You will have an English guide in Jerusalem and Bethlehem only and may be joined on the tour by other nationalities (mostly Russians). We will start from Eilat and drive along the Arava Valley toward the Dead Sea the deepest point on earth; which is more than 400 metres below sea level. For 1 to 1 ½ hours we will enjoy the marvelous experience of floating (not swimming) in its unique water, which contains an unusual amount of healthy minerals. Also we can shop and explore the Dead Sea’s natural beauty products such as salts, mud, lotions and facial masks. Then we will ascend to the Holy City, Jerusalem. On the way to Jerusalem we will see Qumran Site (where the Dead Sea scrolls were found), the Judean Valle and Jericho where we can see some nomadic Bedouin tribes along the road through Judean Desert. Upon your arrival in Jerusalem you will be met by our tour representative who will accompany you through your tour up until the end of Bethlehem. Reaching Jerusalem we start with a panoramic view from the Mount of Olives a good place for an introduction to the city and its history. Then visit Old City in Jerusalem to see the Wailing Wall, which represents the last remnants of the Jewish Temple and continue through the “Way of Suffering” “Via Del Arosa” which leads us to The Church of the Holy Sepulcher where, according to Christian tradition Jesus was crucified and buried. Next we drive to the city of Bethlehem where we will visit the Church of Nativity which is the central pilgrimage destination for all Christians because Jesus Christ was born there. In Bethlehem we will shop at the souvenir shops and enjoy a lunch. At the end of the tour drive to Eilat you will cross the border back into Akaba. Accommodation in Jordan with dinner in the hotel.

After breakfast driving to Petra. We start the tour on foot, though the Siq , a narrow, winding gorge over 1 kilometer in length. Beautiful sandstone formations of Petra were once occupied by the Edomites. One of the reasons why Petra was such an attractive site for the Nabateans is its virtual hiddeness behind a narrow and easily defensible canyon known as the Siq. As you come to the end of this beautiful ravine, a very narrow opening offers a peephole to one of the most spectacular sites in Petra – the treasury. Carved out of the side of the sandstone mountain face probably in the first century BC, scholars debate as to its actual function.  After the visit to the treasury we will visit the Roman theater which dates back to Byzantine era & the Royal tombs. Not a lot is known about the ancient culture of the Nabateans, except that they were excellent engineers with amazing skill and craft. They built water conservation and irrigation systems and carved their homes, temples and tombs right out of the rocks. At the end of the tour lunch. After lunch driving back to Aqaba. Cross the border to Eilat. Your guide will be waiting to assist you across the border. Next crossing the border Eilat – Taba. Transfer back to Sharm El.Sheikh where you will be taken to your hotel.

Trip runs on Monday’s and Thursday’s. 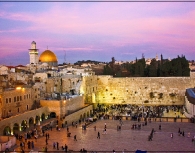 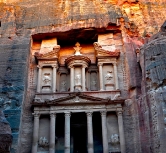 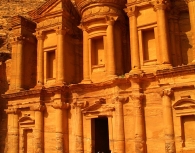 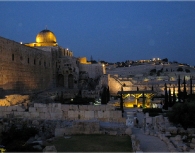 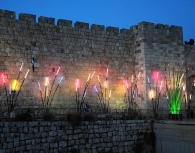 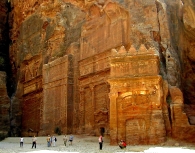